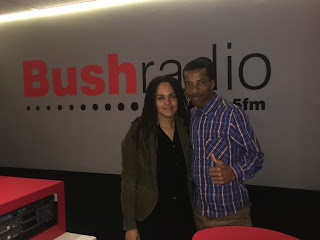 Ernestine Deane is back in South Africa, and we had the pleasure of hosting her here on Bush Radio this morning. The well-known South African singer/songwriter has been playing music abroad, but is back in her home country. She will be playing a homecoming show at Café Roux on Shortmarket street this Wednesday at 6:30pm.

Ernestine Deane spoke to us about the importance of focusing on South African Music in South Africa itself rather than overplaying international artists over radio, TV, and other medias. The early years of a musician’s career is important to their development as an artist and Ernestine Deane says that our local music venues and radio stations should promote and play local artists in order to help their careers and spread South African Music across the country and abroad.

Ernestine says that her music often begins as a poem and then the music follows. She enjoys collaborating with other musicians and constantly seeks out other artists who have hearts and audiences that inspire her. Famous names are not always the priority, instead, Ernestine focuses on the heart of the music and musicians surrounding her.

Ernestine will be releasing an EP soon. She believes that albums are phasing out, so she will continue to release singles. Keep an ear out for more of her upcoming music and head over to Cafe Roux tomorrow evening to see her perform live.